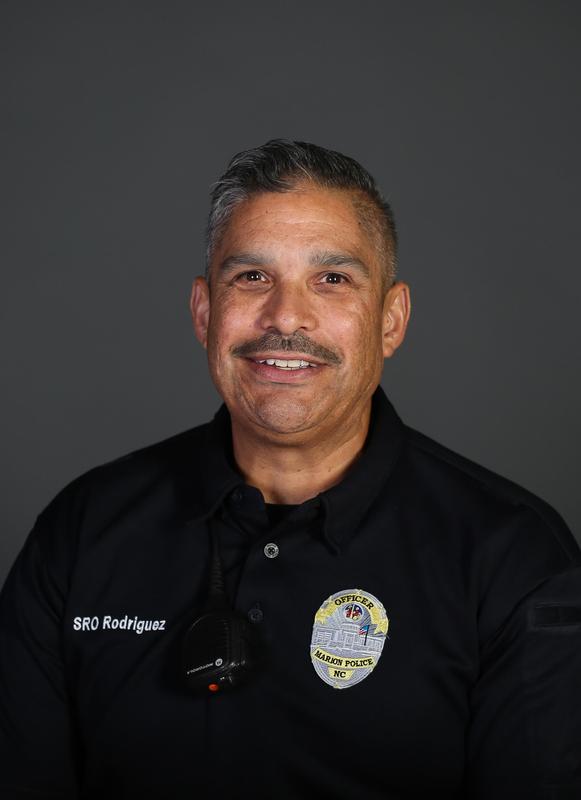 “We are grateful to our Board of Trustees for their support to help bring Officer Rodriguez to our campus,” said Dr. Brian S. Merritt, MTCC President. “In January, the board approved a moderate increase in our campus access, parking and security fee to help fund this new position. We are thankful to the City of Marion for its partnership. Having a consistent, full-time resource officer will enhance our security presence and provide a level of comfort to our faculty, staff and students on campus.”

To assist with start-up costs in establishing the new SRO position and other security protocols, the college also applied for and was awarded a grant in the amount of $22,500. The City of Marion, as an administrative agent for the Marion ABC Board, notified the college of the award in May.

Officer Rodriguez is not a completely new face on the McDowell Tech campus. In 2006, he graduated from McDowell Tech’s Basic Law Enforcement Training (BLET) Program. Coming back to McDowell Tech seems like a natural progression in his career, said Rodriguez.

After graduating from the BLET Program, Rodriguez became a patrol officer with the Marion Police Department, where he later progressed to the rank of Corporal before being promoted four years later to a narcotics detective, a job he held for 10 years. As a narcotics detective, he was assigned to the McDowell County Drug Task Force. He has special training in Basic Narcotics from the DEA (Drug Enforcement Agency), as well as the Department of Homeland Security. During his career, Rodriguez has also been called on to work on Homeland Security Task Force projects, including a high profile human trafficking where his bilingual speaking abilities (English and Spanish) were particularly useful.

Those bilingual speaking skills came in handy again when Rodriguez began working at as School Resource Officer at East McDowell Middle School two years ago where an above-average percentage of students are of Hispanic background, he said.

Rodriguez enjoys working as a school resource officer. “I wish I had done this a whole lot earlier in my career,” he said. Compared to his work as an undercover officer, the work schedule is much more amenable to having a family life, and he actually feels like his talents are being used more in this role.

“We need to reach kids when they are young before they get to the stage where they are succumbing to peer pressure to use drugs or engage in other illegal activity,” he said. “That is what I am trying to do as a school resource officer and I feel like I’m having more of a long-term impact on them and society than I have had at other times in my career.”

At a time when the integrity of law enforcement officers has been repeatedly called into question on a national level, Rodriguez wants to be positive role model and influence on people’s lives, particularly teenagers and young adults. “I want them to trust officers and to show them why they can and should do that,” he said. “A lot has changed since I was in school. Since I became an SRO, the thing that has probably surprised me most is the attitude of young folks toward teachers and people in authority. While having an SRO is needed for safety and security reasons, it also gives us a chance to say to young folks, ‘you need to have a little self-control.’”

Originally from Brooklyn, NY, Rodriguez moved to this area twenty-three years ago. He has two adult children and two grandchildren from his first marriage and two stepdaughters from his second marriage. One of those step-daughters is a student at McDowell Tech with aspirations to become a physical therapy assistant. The other is a student at New Manna Christian Academy. His wife has taught at West Marion, New Manna, New Dimensions Charter School and Oak Hill Elementary in Burke County, and is now teaching at J. Iverson Riddle in Morganton. He and his wife and stepdaughters reside in Nebo.

“I am glad to be at McDowell Tech,” said Rodriguez. “We need well-trained officers in our schools, officers who can deal with issues as they arise in school, but with training to recognize problems that may be happening outside of school that could impact a student’s actions and interactions on campus. It’s also important that those officers have an interest in working with students and young adults, and I have that interest.”

During the summers, when on-campus classroom activity is more limited, Rodriguez will continue to assist Marion Police Department with calls as needed.

“We are grateful to our board of trustees for recognizing the need for an increased security presence on campus, and to the Marion ABC Board for awarding us a grant to assist with start-up costs for this project,” said Dr. Merritt, the MTCC President. “We aim for our students to Learn and Grow, but for effective learning to take place, our students, faculty and staff must have an environment in which they feel safe and secure.”