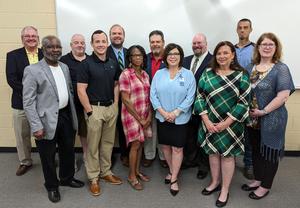 Graduates, industry partners and McDowell Technical Community College (MTCC) administrators and Board members met Monday morning in an informal meeting designed for members of the NC General Assembly to highlight the economic impact of MTCC and the North Carolina Community College System (NCCCS). A wide range of issues important to regional and statewide workforce development were discussed, including the need for stronger investment in NCCCS to strengthen the quality and viability of programs and services at community colleges across the state. Like McDowell Tech, these 58 colleges serve a tremendous value to North Carolina families, students, employers and taxpayers.

Rep. Dudley Greene (NC-85) heard the group loud and clear. “I am a product of the community college system,” he said, joking that he attended a neighboring community college 100 years ago, “and I know the value of what you do. I particularly appreciate the flexibility that McDowell Tech and other community colleges have to rapidly gear up to meet the needs of industry as a whole, because that is an economic driver for the state.” Whether in the health care industry or advanced manufacturing, he invited the group to contact him with ideas for how the state can continue to find ways to solve workforce needs.

MTCC Board of Trustees in attendance included: Mr. Gary Stroud, Chairman, who is also an executive board member of the NC Association of Community College Trustees; Gwen Conley; Ray McKesson; and Don Ramsey.

Dr. Brian S. Merritt, MTCC President, facilitated the conversation with students and employers, who spoke about labor shortages, the importance of the quality training and opportunities provided by MTCC and NCCCS, and the personal connection they have to the faculty, the college, and to the community, which made their experiences so special. The economic impact of MTCC and all 58 of North Carolina’s community colleges was also a strong topic of discussion.

Dr. Merritt made it clear, “The keyword is investment.  A stronger investment is needed in our students. Our most valuable asset is our people, and we must invest in our employees to pay competitive wages. Our employees are passionate about our purpose. However, purpose doesn’t pay the bills. The time is now to make the investment of a lifetime in the future of North Carolina, an investment that will drive our economy for decades to come.”

According to a report recently release by the state, “in FY 2019-20, MTCC added $67.8 million in income to the McDowell County economy, a value approximately equal to 4.4% of the county’s total gross regional product (GRP). Expressed in terms of jobs, MTCC’s impact supported 1,462 jobs. For perspective, the activities of MTCC and its students support one out of every 14 jobs in McDowell County.”

Statewide, the NC Community College System adds $17.1 billion in income to North Carolina and supports one out of every 19 jobs.

On an individual level, that report estimated that for every $1.00 a student spends on education at McDowell Technical Community College, they gain $5.50 in lifetime earnings. Expressed another way, the average associate degree graduate from MTCC earns $7,000 more per year than their counterparts working in North Carolina who only have a high school education. That equates to a 27.5% annual rate of return for MTCC graduates, according to data from the Economic Impact Report. The annual rate of return for 30-year investment in the Stock Market is only 10.6%.

More Than Just the Numbers

But it is more personal for students and employers—the returns are often about much more than numbers. Lamina Duckworth, expressed profound appreciation to the college and specific faculty and staff for the quality of the Nurse Aide and Practical Nursing Education programs she studied at McDowell Tech. Duckworth had retired from the City of Morganton before she decided to return to college to study nursing. She initially chose McDowell Tech’s Nurse Aide program because of its compact schedule, but quickly realized the superior quality and personal touch that McDowell Tech offered compared to other colleges she had attended or was familiar with.

“As a working nurse,” she said, “I appreciate that McDowell Tech prepared me not just to be a nurse, but a strong one.” With the pandemic, nursing shortages, and radical changes in the nursing profession, she told the group that she felt well-prepared for some of the unique challenges she has faced in the nursing profession in the last couple of years.

Dr. Tonia Hale, Interim CEO at Mission McDowell Hospital and CEO/CNO at Blue Ridge Regional Hospital in Spruce Pine, expanded on Duckworth’s comments about changes in nursing practice in recent years due to extreme staffing shortages. Dr. Hale is a nurse herself, having started her healthcare career as a pharmacy technician 35 years ago, and transitioning to nursing in 1994. During the pandemic, she said, many older nurses left the profession and many who had previously considered careers in nursing had second thoughts about entering a profession which demanded potentially life-threatening or life-altering consequences for their own health and that of their families. “Data shows that the nationwide nursing shortage, which had previously held relatively steady at around 15%, is now topping 27% consistently. It is the most shocking time I have seen in my life,” she said.

“There are so many options for nurses today and so many openings in the field, that those of us in management have had to look at alternative models of patient care to meet staffing and patient needs,” she said. “That includes bringing back LPN-RN teams for patient care and adding paramedics to our care teams.”

Another member of the Mission team, Dr. Chuck Tucker, Division Associate Vice-President of Academic Affairs at HCA Healthcare, echoed Hale’s concerns. Tucker is also a nurse, former EMT (emergency medical technician) and nursing educator and administrator. “Friday afternoon,” he said, “I checked a number of hospital and similar websites and quickly found over 1,000 open positions for nurses in Western North Carolina. Yet, based on current levels, we are only turning out 554 nursing graduates a year to fill those positions.”

HCA/Mission is doing its part, Dr. Tucker said, to work with McDowell Tech and other college’s to expand clinical spots in HCA hospitals and clinics to help allow for expansion of nursing slots throughout the region. Expanding capacity in nursing programs requires additional funding for additional faculty, administrative costs and facility expansion, as well as approval by the NC State Board of Nursing, but Tucker said that both are critical to reducing nursing shortages, now and in the future.

Ironically, in MTCC’s recent facilities master planning process, the most significant need and top priority identified by faculty, staff and community stakeholders was a new Health Sciences and Public Safety Complex to support the college’s new standalone Associate Degree Nursing program and other allied health, fire and rescue training programs. Initial estimates indicate that such a facility would cost between $15 and $20 Million.

Public Service degree programs represent a consistently popular option for students, all with high rates of job placement and job satisfaction. Noah Pauley is recent graduate of McDowell Tech’s Basic Law Enforcement Training Program (BLET). Pauley is a native of Burnsville who had worked as a firefighter in DeKalb, GA before returning to North Carolina to train for a job in law enforcement. After talking with Alan Moore, Director of MTCC’s BLET program, Mr. Pauley chose to attend McDowell Tech over programs at two other community colleges closer to his home in Madison County. During the time he was in BLET, he drove an hour and 15 minutes each way to class.

But ultimately, he said, “It was the best decision I could have made.” He feels the quality of McDowell Tech’s BLET program is head and shoulders above other programs, and when he entered a training position with a local sheriff’s department after graduation, his superiors were impressed with the training he had already received. Currently, Pauley works with the Burnsville Police Department in his hometown.

Brett Duke, a welder with Morganton Pressure Vessels (MVP), told the group that he had always wanted to be a welder, but having to work full-time made it next to impossible for him to take welding classes. However, on recommendation of a family member, he decided to talk with Clay Dowdle, lead welding instructor at McDowell Tech, and found that Mr. Dowdle was willing to work with his employer to facilitate class attendance. Duke enrolled in the program tuition-free through the Learn & Grow Scholarship Program and graduated last fall. He had high praise for Dowdle and the Welding program in general.

Heather Spawn, who works in Human Resources at Morganton Pressure Vessels, told the group that recruiting welders is an ongoing problem, but that MPV regularly works with Mr. Dowdle to allow their employees to take evening classes in welding at the college. The demand for welders is so strong, she said, that the company even hires high school graduates to do what they refer to as “non-pressure welds,” as opposed to “pressure retaining welds,” welds that have to hold under pressurization. MPV is certified by the American Society of Mechanical Engineers and not only welds pressurized tanks or vessels, but also does a variety of other specialized welds, such as medical equipment welds.

Dowdle told the group that he believes the recent offer of tuition-free college has helped grow his program. He currently has approximately 27 students enrolled, which is much higher than in previous years.

“We’ve got to let students know that they don’t have to go to a four-year college,” said Brian Piercy, a member of the McDowell County Board of Education and the McDowell Fire and Rescue Association. He referenced a recent Career and College Promise student who simultaneously graduated from McDowell Tech and McDowell High School and makes $45,000 per year in a technical career field—right out of high school. “We desperately need investments in our employees, our students, and our facilities to produce graduates for our workforce, like our public service professions,” he said. “How can we provide the services that people need, that they demand, without that investment?” Piercy also referenced joint plans in the early stages by MTCC, the McDowell Fire and Rescue Association, and others to conceive a joint-use Health Sciences & Public Safety Training Complex to be located at MTCC.

“People understand the value of what we do and fully support McDowell Tech and the NC Community College System,” said Merritt, following the meeting. “However, NC’s investment in community colleges is only 53% of the total state funding received for first and second-year university students in North Carolina. We aim to be competitive and need stronger funding to keep our high-quality faculty from leaving. We must continue to drive home this message about investment in our community colleges to ensure future students like Lamina, Brett, and Noah, and employers like Mission McDowell, Morganton Pressure Vessels and our public safety partners have a skilled workforce ready to serve our communities.”