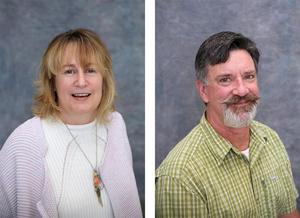 Anyone who wants to know what “excellence” looks like need only look at Chuck Bowling and Lorrie Truett at McDowell Technical Community College to find an answer. They are “excellence personified.”

Bowling is McDowell Tech’s 2021 Excellence in Teaching Award Winner, and Truett is the 2021 Staff Member of the Year. Bowling and Truett are two of the primary reasons McDowell Tech continues to have a reputation for professional, caring service to students, potential students and visitors.

“We are immensely proud of Chuck and Lorrie,” said Dr. Brian S. Merritt, MTCC President, “for the extraordinary service they provide to our students and members of the McDowell Tech community in their own unique ways -- Lorrie as our Front Desk Receptionist and Chuck as one of our most engaged and respected faculty members.”

Bowling and Truett were nominated by students and peers and vetted by a selection committee who interviewed the nominees and reviewed recommendation letters submitted on their behalf, as well as materials prepared by the nominees themselves.

“Both Lorrie and Chuck are sincere, supportive individuals,” said Merritt. “The selection process is suspenseful, but this year, we have two recipients who are mission-focused and personify MTCC’s core values” he said.

Truett began her career at McDowell Tech not as a staff member, but as a student, first graduating in 1983 with a Diploma in Cosmetology and again in 1997 with an Associate’s Degree in Administrative Office Technology and Certificate in Office Systems Technology.

Shortly after obtaining her Associate’s degree, she began what has become a long vocational career at McDowell Tech, holding a variety of positions, serving first as Secretary to the faculty in College Transfer and General Education beginning in 1997. From 1999 to 2016, she served as an administrative assistant and data technician to Continuing Education before becoming Receptionist in 2017.

Along the way, however, she also taught Continuing Education courses, such as computer courses at McDowell Senior Center, Customer Service skills and Records Maintenance. At other times, she was a lab assistant for curriculum computer courses and administered typing exams for Office Administration students.

But it’s not the breadth of her experience that makes Truett such a perfect example of excellence. It is her sweet spirit, gentle, cheerful disposition and servant’s heart that sets her apart from her peers. Her willingness to go the extra mile for students, visitors, vendors and others is not an occasional act, but a modus operandi—a distinctive pattern of behavior or “m.o.” It is who she is.

Maybe more importantly, when Truett is talking to a caller on the phone or assisting an individual in person, she has a special way of connecting with them that makes them feel important and welcome, said Stacy Buff, Dean of Career and Technical Education, one of several people who nominated Lorrie for this year’s award.

Rather than giving directions to a classroom or office, Truett will frequently walk a student or visitor to where he or she needs to go. Her helpfulness sets the tone for a good student or visitor experience, said Blake Madden, Photography Instructor, and sets the bar for customer service that administrators undoubtedly hope will become contagious.

When she is not engaged with students and visitors on the phone or in person, Truett will volunteer to help stuff admissions envelopes to be mailed to admitted students or prepare agenda packets for board of trustee members, among the dozens of other helpful things she does to take the load off of others or make daily operations at the college more efficient.

In the classroom, Chuck Bowling is the person who set the bar for excellence this year, and then raised it. Those who nominated him for this year’s Excellence in Teaching Award were profuse in their praise of both his classroom skills and his genuine concern to share his knowledge of Biology, Anatomy and Physiology and related courses with students who clamor to get in his classes.

One student who nominated Bowling commented that, “His classroom is the most effective I have ever been in… He is really interested in how the student learns best. He worked with me on multiple occasions, explaining (the material) in different ways, with different examples, until I ‘got it’ and could explain it back to him.”

She went on to say that he was even willing to give up his lunch hour to work with students who needed help, and offered to have weekly study sessions for her and others who had trouble understanding material. Even after she finished taking his classes, she said, he has continued to help her with academic studies in other areas.

That earnestness to make sure that his students are successful in the classroom and in life is what makes Bowling such a popular instructor. His passion for teaching, particularly in Biology, his chosen field, has served to inspire countless numbers of students since he began teaching at McDowell Tech in 2010.

His classes in Biology and Anatomy and Physiology provide the foundation for all upper-level work in nursing and other health science programs, and are generally part of the core list of courses taken by College Transfer students who plan to do Bachelor’s level work at four-year colleges and universities. Many of his students have gone on to even more advanced degrees, including degrees in Medical Sciences and more.

Bowling holds a Bachelor’s degree in Biology from Texas A&M University-College Station (1989), a Master’s degree in Biological Sciences from Florida State University-Tallahassee (1992), and is expected to complete his Ph.D. in Community College Leadership from Old Dominion University in Norfolk, VA later this fall.

Bowling’s teaching experience began at his graduate alma mater, Florida State University, where he taught from 1993 to 1999, before accepting a position as Coordinator of Outreach for Environmental Education Programs and Instructional Media, a position he held from 1999 to 2008.

During this time, he also taught for four years in the Upward Bound Program at Appalachian State University, a pre-college program for first-generation college-bound high school students, as well as students from low-income families also preparing for college. In 1999, he became, first, Coordinator of the TRiO Upward Bound Program at Appalachian, and then Assistant Director of the Program, a position he held until 2004.

From 2004 until 2008, Bowling was Director of College Awareness Programs at Appalachian, followed by a two-year stint as Institutional Researcher at Caldwell Community College from 2008 to 2010. He has taught full-time at McDowell Tech since 2010.

For almost 10 years, Bowling has been a facilitator with the NC Great Teacher Seminar program, and served for one year as a part-time curriculum developer for the NC BioNetwork Program through the NC Community College System. Bowling’s excellence in the classroom is well-documented with numerous nominations and three finalist designations for Teacher of the Year at McDowell Tech.

During his time with Upward Bound and Florida State University, Bowling had primary responsibilities for at least six large grants, including at least three grants for Saturday-at-the-Sea and Sea-to-See experiential summer camps focusing on Marine Biology.

Bowling is also a prolific speaker, serving as presenter for at least 15 to 20 professional conferences over the last two decades. He is also a witty writer with three professional publications in scientific journals with clever titles like, “Why Snails Hang Out at Bars,” a study on the size and habitat of the Florida Crown Conch, published in the Journal of Experimental Marine Biology and Ecology.

Finally, Bowling is or has been a member of at least two dozen professional and/or community service organizations since the early 1990’s.

“The student experience at McDowell Tech is amazing because of Chuck and Lorrie,” said Merritt. “Chuck and Lorrie will now move on to compete for the annual awards competition recognized by the North Carolina State Board of Community Colleges, and I know they will represent us well.”