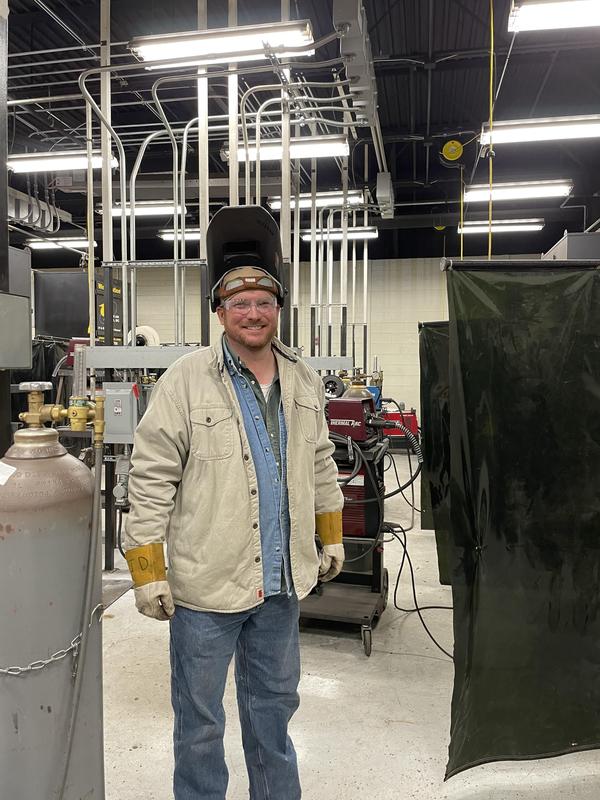 Meet Clay: A world-class welder who shares his passion at McDowell Tech. An apprenticeship took him all over the world, from coast-to-coast in the U.S., then Sweden, Belgium, & Slovenia. Now, he changes lives at MTCC!

MARION – Welding might appear on Mike Rowe’s Dirtiest Jobs show as a job that is unappealing to most people, but it is a job that can take you around the world.  The art of welding took Clay Dowdle all over the world during his welding career, but the foothills of North Carolina and his family recently called him home.   Clay joined the faculty at McDowell Technical Community College in August 2020 to teach welding classes and share his wealth of knowledge about welding.

Clay has always enjoyed working with his hands.  He got interested in welding around the age of 14 years while helping out on his uncle’s and grandfather’s farms.  One day, Clay and his brother met a gentleman, Robert, who worked in construction and traveled a good bit with his job.  Robert told Clay and his brother that they needed to stay in school and that they could contact him about getting a job when they graduated from high school.

Clay took welding classes in the 10th, 11th, and 12th grades at McDowell High School.  He said, “I did okay in school, but I really enjoyed the shop classes that allowed me to complete ‘hands-on’ projects.”  In his senior year, Clay went to the state competitions and remembers placing either second or third in the state. During the summer months between the 11th and 12th grade, Clay worked for Robert (the gentleman who worked in construction and told him to stay in school) and enjoyed it.  Clay graduated on a Friday and, remembering the offer that Robert had made years earlier, Clay called Robert the very next day.  Robert offered him a job and Clay found himself traveling to Ohio for his first job on Sunday, just two days after graduating from high school!  It was an apprenticeship job that involved welding with the boilermakers who worked all over the United States.  Boilermakers work with any type of vessel or container that holds liquid:  pressure vessels and reactive vessels. These vessels are found in many industries including power plants and paper mills.

The job took him to places all along the East Coast, from Maine to Florida, performing tank or vessel repair work from 2001 to 2006.  In 2006, Clay started working in nuclear power plant settings.  This type of work took Clay all over the world: from coast-to-coast in the US, Sweden, Belgium, and Slovenia, just to name a few.

Special credentials are required to work as a welder in nuclear power plants, which very few welders have.  Clay, along with a small team of welders, would go to a shop in Lynchburg, VA to train for two or three weeks at a time to acquire the skills needed to work in the nuclear power plants.  After the training, the welders would be shuttled by limousine to the airport to fly to their destination, all expenses paid.  Clay said, “I felt like a rock star!”

Clay’s last job that he held from 2016 to 2019 took him to Georgia where a new nuclear power plant was being built.  Construction of a nuclear power plant had not been started in the United States since the late 1970’s. The reactor was built in South Korea; reactors were built in the US in the 1970’s but none have been manufactured in the United States since that time. The welders on this project worked in teams of only two or three and were called Reactor Vessel Internals (RVI) Crews.  Clay and his brother were fortunate to work on an RVI Crew together and were the first Americans to step inside the reactor at this plant!  Clay felt that this was quite an honor.

Working around the world meant that Clay was away from home an average of 300 days a year which made it very hard on his family.  Clay and his wife, Katie, have three children ages 11, 9, and 7.  Clay decided to come home at the end of 2019 and start his own business.  “I really don’t have a hobby, so I would purchase welding equipment while I was working,” Clay said.  This equipment is now being used for his business.

A position opened up in the Welding program in 2020 and a friend of Clay talked him into applying for the job.  Clay was hired and has found that he really enjoys sharing his love for welding and helping others learn how to weld in order to get a job and provide for their families.  Clay indicated that “welding has not changed much in the last 60 years.”  Some processes have become automated while most processes are still manual.  Clay is a master of these skills and is grateful to have the chance to teach these skills to his students and help them be successful welders.  Welders are needed in several industries throughout McDowell County, and Clay hopes to assist these industries in filling the open positions.

Clay is especially proud of one student, Chris Clayton, who has been in his classes this academic year.  Chris lost his job at Ethan Allen when the plant closed in Old Fort in 2019.  Chris enrolled in the welding classes at McDowell Tech, and Clay is very impressed by Chris’s commitment to learn everything that he can about welding.  Clay plans to “show him everything I know” and cannot wait to see where welding takes Chris in the future.  Who knows?—welding may take Chris all over the world.  Just like Clay Dowdle!

“We are very lucky to have attracted a world-class instructor like Mr. Dowdle to our staff,” said Dr. Brian S. Merritt, MTCC President. “It has become increasingly difficult—in fact, nearly impossible—to recruit and retain highly skilled, in-demand instructors in technical and vocational programs who are of Clay’s caliber, given that community college faculty salaries in North Carolina rank 40th in the nation.  Even our colleagues in the University System and K-12 public schools are able to offer higher salaries than we can. That is why it is imperative that our legislators consider greater equity for community college faculty salaries in this legislative session.”