"Not All Those Who Wander Are Lost" --J.R.R. Tolkien 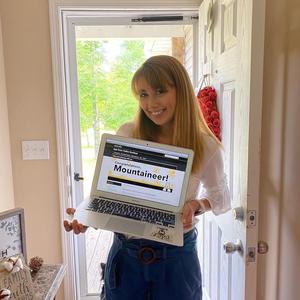 When Kaitlyn Helton was a senior in high school, she turned down a scholarship to a four-year college in favor of taking classes at McDowell Tech because she wasn't quite sure what she wanted to study or what type of career she wanted to pursue. In the first few days of her second semester at McDowell Tech, she had a "eureka" moment in one of her new classes and realized that she had found her niche.

MARION – “Not all those who wander are lost,” wrote J.R.R. Tolkien in The Fellowship of the Rings (“The Riddle of the Strider.”)

Kaitlyn Helton agrees. As a high school senior, she was undecided about where she wanted to go to college or what she wanted to study when she got there. But what she knew for sure is that she didn’t want to head off to an out-of-town university undecided. “I had actually been accepted to a local private college and offered a scholarship to play tennis,” she said, “but after much thought and many prayers, I decided that it was best for me to stay put in Marion!”

So Kaitlyn made a plan: she would take general education classes at McDowell Tech, with the hope of transferring to a university when she had finished those classes. Halfway through her first year at the college, she began to think about different degree programs and career pathways for her future.

That is when she decided to enroll in early childhood education classes. “I put a lot of thought into this change and into the classes that I began taking!,” she said. Almost immediately, she realized that she had found her niche. “I knew right away that I needed to be in the classroom!”

She was so certain about that decision that during her very first week of early childhood education classes, she applied for a job with McDowell County Head Start, a program that promotes school readiness for pre-school children under 5 years of age. It seemed like the perfect fit to her, since so many of her assignments and activities in her education classes had to be completed in a preschool classroom anyway.

“In my interview, I remember telling them my educational path and how I would finish my degree at McDowell Tech before transferring to a university to finish my bachelor’s degree,” she said.

She impressed her interviewers, as she was offered the job and began working in a Head Start classroom. “What an amazing experience it was to be in the classroom while I was working on my degree,” she offered. “And Head Start was so amazing to work with me while I finished that semester of day classes at McDowell Tech before eventually switching to night classes at the college.”

“I was in a ‘pinch me’ mode the first several months after that. I could not believe that at 18 years old that I was already working for McDowell County Schools and was already in the classroom. I remember the day I got my school work badge; I was so sentimental and excited to receive that badge. It was like an assurance for me—‘You are here. You did this!’

As she began her second year at McDowell Tech, Kaitlyn began taking classes to complete an Associate of Applied Science Degree in Early Childhood Education and continued to complete general education classes that she would eventually transfer to a four-year university. She completed that associate’s degree last August and transferred to Appalachian State University with a whopping 89 credits.

“Taking all of those classes helped me a lot. Many of the courses I took in the EDU (Early Childhood Education) program at McDowell Tech counted for credit in my program at Appalachian, which means that I have to take less classes there to complete my bachelor’s degree,” said Kaitlyn. “Financially, starting out at McDowell Tech also saved my little family so much, as well as quite a bit of time.”

In some ways, Kaitlyn was also a McDowell Tech EDU trailblazer. She was the first person to transfer to Appalachian State through the college’s BK articulation agreement, a type of agreement community colleges establish with four-year institutions regarding the transfer of specific credits between the two colleges. In addition, as the first person to use this agreement, Appalachian is also creating a new path for Kaitlyn and students like her, allowing her to complete most of her credits online through distance education platforms.

“I would not be where I am without my start at McDowell Tech,” she stated. “I know it will help me to go where I want to go as well! The education I received there and what I am receiving now at Appalachian will help me reach my dreams and goals for the future. I would recommend McDowell Tech, and specifically the EDU program, to anyone.”

Kaitlyn is not the first person in her family to find their niche in life in the early childhood education program at McDowell Tech. Her mother, Amy Helton, followed the same path Kaitlyn took and now teaches fourth grade at Eastfield Global Magnet School, where she has worked for the last 14 years. “I know how hard my mom worked in college to be able to one day teach in a classroom, so I had a good role model to follow.”

But Kaitlyn’s McDowell Tech connections are deeper than that. Her grandmother, Sherry Helton, recently retired as an administrative assistant at the college and was instrumental in her college transition and networking. “She helped me tremendously in knowing who to speak to and where to go when I had questions and concerns. She also helped me with larger decisions I had to make, such as changing my path halfway through my first year at McDowell Tech. I truly don’t believe I could have done it without her!”

Kaitlyn is quick to credit others at McDowell Tech for some of the success she has had in college, especially Nicole Smith, Dr. Beverly Watts and Rhonda Steele. “I always brag on how much Mrs. Smith helped me through everything. Ironically, the best example I can give actually occurred after I graduated from McDowell Tech and was enrolling in classes at Appalachian State. We discovered a problem with my courses that ended up actually being a huge blessing instead of a problem.

“Most students in the BK (Birth through Kindergarten) program at App State,” she explained, “only finish their college transfer degree before they transfer to App. Because I had taken my college transfer classes AND had graduated with a full associate degree in Early Childhood Education, the majority of my EDU credits from McDowell Tech transferred to Appalachian in place of classes that I would normally have taken in my first year there. That meant that I was a full cohort ahead of students who transferred at the same time I did. We would have never found that out if it had not been for Mrs. Smith calling the advising team for the BK program at Appalachian and talking to them for over an hour. That is just how above and beyond she went to help me make sure I was on the correct path.”

“Dr. Watts was also so supportive to me when I had questions and was considering path changes. I came to her looking for advice, and she always led me in the right way. And Mrs. Steele—I enjoyed her EDU classes so much! They taught me things that I will carry with me for the rest of my education and in my career!”

“If I had to do it all over again,” said Kaitlyn, “there would only be one thing I would change about my decision to enroll at McDowell Tech—I would have started taking general education classes at McDowell Tech while I was still in high school. I chose not to take that route, but looking back, it would’ve been such a smart idea! I would recommend it to anyone. Getting those courses out of the way early so you can focus on your areas of interest when you transfer is so much easier and cheaper!

“I know it’s not always easy,” she added, “but age is not a factor when it comes to working hard for those things you set your mind to!”

Be Open to Change

To students who may be considering a course of study at McDowell Tech, or any other college for that matter, Kaitlyn has some words of advice: “Sometimes things don't pan out the way you think they should. Sometimes you realize that the path you are pursuing may not be what you thought it would be—and that is okay. Life is about adjusting to those changes, taking what you are given and running with it. I had my challenges, as everyone probably does. But just because you run into a road block doesn't mean that is the end. There will always be hard times and stressful days, but your success may depend on your perspective. One day you will look back and be thankful for those times, because they made you stronger and better equipped to face the next challenge. That is what I learned most during my time at McDowell Tech: Challenges come, and you will have a choice to make. When you choose to pick up and march on, that's when great things will happen!

“Kaitlyn’s story confirms that McDowell Tech is about family. Great things are already happening for Kaitlyn,” said Dr. Brian S. Merritt, President at McDowell Tech, “but we know that even greater things will happen for her students as she continues to further her education at Appalachian State and beyond. The lessons she has learned extend far beyond her technical training in Early Childhood Education. She has learned life skills that will benefit her and future generations of students for years to come. We are proud to have been a partner in her success.”