Board Appointments and Officers 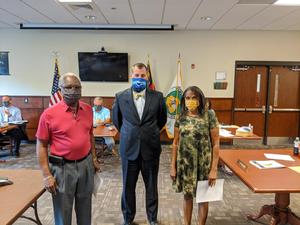 Click on the headline above for information about new trustee appointments on the college's board of trustees as well as officer information for 2020.

McDowell Technical Community College welcomed three individuals to new terms on the college’s board of trustees during a regularly scheduled meeting of the board on Thursday night, August 13th, 2020.

Two of the individuals, Ray McKesson and Gwen Conley, were reappointed to new terms by the Office of the NC Governor and McDowell County School Board, respectively. Their terms will end on June 30, 2024.

Mark Garrett, Superintendent of McDowell County Schools, was appointed to his first term on the board by the McDowell County Board of Commissisoners. Garrett’s term will also end on June 30, 2024.

During the same meeting, board members re-elected Gary Stroud and Nancy Hunter to serve as chair and vice-chair of the board, respectively. Ryan Garrison was elected to serve as the board’s official secretary for the coming year.